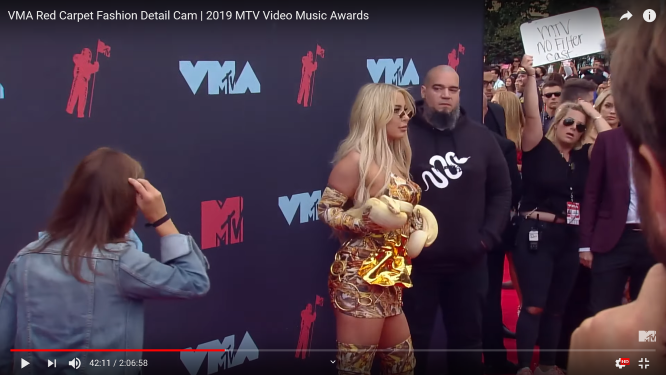 Certainly, the VMAs has changed from the dim and distant days of 2016 and 2014 when we contributed latex accessories for Beyoncé’s dancers (see here). But the neon glitz, wild wardrobe choices, and this year clean water protest outside of the venue made MTV’s big night as interesting as ever. Here’s a look back at the sartorial highlights of the 2019 VMAs a week just past.
A sure champion of body positivity, Bebe Rexha revealed herself in a metallic silver gown last Monday night in New Jersey. Although showing the singer off in its well-placed cutouts and high slit, what made this outfit all that more interesting was that it had been made by Christian Siriano…just two hours before the show. Rexha’s busy schedule touring with Jonas Brothers only allowed for a last-minute fitting and making.
Snakes have made an appearance before at the V.M.A.’s (most notably Britney PSeras tur with her real-life boa in ). This year both H.E.R. (Gabriella Wilson’s professional acronym that stands ‘Having Everything Revealed’) and YouTube star Tana Mongeau both attended the V.M.A.’s with a live snake as their slithery +1.
As far as ‘fake’ boas go, Lizzo sported a crimson one, topping her curve-hugging red bespoke Moschino off-the-shoulder dress. Printed diagonally across Lizzo’s dress was the word SIREN in silvery letters.
Two trains left the station of the red carpet this night; Camila Cabello had one flowing from her white cut-out dress, and Zara Larsson had one trailing her pink off-the-shoulder gown. Lil Nas X strutted in a silver diamond-studded suit, and Ava Max managed to get in some cosplay in her metallic jumpsuit, cape, and platform knee-high boots.
Taylor Swift came in a colorful and diamond jeweled Versace blazer and black Christian knee-high boots, Halsey managed to sneak in a black waist cincher in the middle of her open dress. And as we have come to expect, Queen Latifah showed-off her usual wardrobe class in a sedate yet sexy Sergio Hudson orange suit.
Another V.M.A. past, what will next year bring?