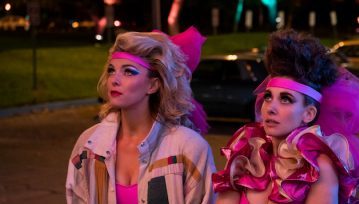 Netflix’s GLOW returned for its 3rd season this month, and with it comes the overtop latex outfits, beads, spandex and 80’s period costuming the “Gorgeous Ladies Of Wrestling” wear in and out of the ring.

This time, the lady wrestlers, and their producers are part of what soon becomes a successful Las Vegas residency at the fictional “Fan-Tan Hotel and Casino.” This allowed the show’s costume designer, Beth Morgan to expand her usual glitz and wild flare with not just the influence of mid-80’s fashions but the legendary sartorial look of Las Vegas. As ever, stars like Alison Brie, Betty Gilpin, and even Marc Maron are finding themselves in stone-washed high-waisted jeans, ‘Members Only’ wardrobe pieces, asymmetrically-cut blazers, as well as the ubiquitous tracksuits and windbreakers. But with Vegas as the setting, as Morgan says in many interviews she gave about GLOW’s costuming this season, she was able to give viewers what they wanted: “a ton of over the top sequins.”

She does this exceptionally well when mixing the GLOW ladies with the Fan-Tan’s other ‘shows.’ The hotel’s “Rhapsody” flashy showgirl residency, has its dancers wearing the well-known showgirl’s headdress and revealing gowns of the time. In fact, in an instance of art imitating art Las Vegas’s long-running showgirl show Jubilee had just closed at the time of the GLOW shoot, and Morgan was able to rent some actual showgirl costumes to dress the show’s fictional dancers. And the Fan-Tan’s drag show “Icon,” gives viewers a wonderful character in “Bobby Barnes,” (fashioned after legendary Las Vegas drag performer Kenny Kerr). Actor Kevin Cahoon, who plays Barnes, bares enough sequin and ball gowns in his impressions of Liza Minnelli, Barbra Streisand, and others to make any fashionista drool.

In the ring, the women of GLOW still sport spandex leotards under the various signature costume pieces for whatever wrestling persona they have adopted. This ranges from Brie’s “Zoya,” Russian ‘red menace’ get-up, Gilpin’s silvery “Liberty Belle,” outfit and even one of the ladies stepping out each night with a huge fortune cookie costume around her.

Already a high-rated winner for Netflix, the setting of Las Vegas for GLOW’s 3rd season has brought the shower to a whole new level of wild style.