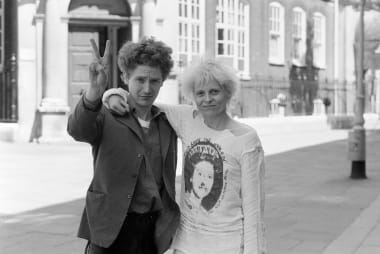 Surely zippers, leather, PVC, rubber, and surely some latex were all textiles well known to designer Vivienne Westwood. A most influential presence, first to the world of punk couture, then fashion in general, as Chrissie Hynde famously said: “I don’t think punk would have happened without Vivienne and Malcolm.”

Vivienne Westwood died this week at the age of 81.

Hynde is referring to the infamous Malcolm McLaren, who would come to manage the Sex Pistols, but also ran a UK shop called SEX in London during the mid-70s. Westwood met McLaren just about when she was thirty (he became her boyfriend when she divorced her first husband), and she designed clothes for the burgeoning hot punk couture aesthetic. The pair would later open a shop called Let It Rock in London, sporting a pink vinyl sign and selling fetish wear and their fashions. Westwood became a seminal figure in the world of ripped clothes, clothespins, etc. and became known as the “godmother of punk.”

At least at the beginning of her designing career.

Westwood was born April 8th, 1941, in the village of Tintwistle Derbyshire. When she was 17, her family moved to London, and she took a jewelry and silversmith course at the University of Westminster (known then as the Harrow Art School). She created her jewelry from this study, selling it in one of the stalls on Portobello Road. In 1962, she met and married Derek Westwood and gave birth to their son Benjamin.

Opening four hops in London, then throughout Britain, then the rest of the world, Westwood and McClaren sold clothes and merchandise, often expounding Westwood’s political causes. The couple’s combined couture collections included Pirate, Savages, and Punkature; after her partnership with McLaren ended, Westwood showed a final collection Clint Eastwood.

The years 1981-thru 1985 were what Westwood called “New Romantic,” 88-91, “The Pagan Years,” and she grew her brand among supermodels and celebrities. Some of the signatures of her style were platform shoes and what was called a “mini-crini,” a version of the Victorian crinoline and the miniskirt.

She’d go on to design academic dresses for King’s College in 2008, created the crew wardrobe for Richard Branson’s Virgin Atlantic airlines, a bespoke wedding gown for Dita Von Teese, the wardrobe for Princess Eugenie’s nuptials, and designs for the 2008 film of Sex and the City.

In 1992, Westwood was awarded her country’s prestigious OBE from Queen Elizabeth and was among the UK’s cultural icons to be included in Sir Peter Blake’s updated version of his “Sgt. Pepper’s Lonely Hearts Club Band album cover in 2012.

Enjoying books, exhibitions, and documentaries about her life and work, Westwood became a global brand stepping well beyond the punk mystique.

The powerhouse designer died this week in Clapham, London.