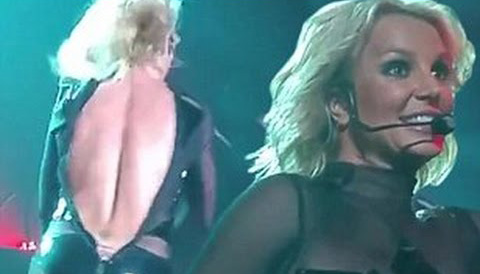 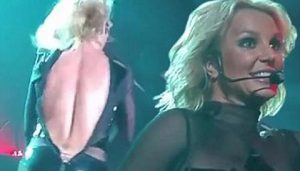 Maybe she should wear late clothing more often? Not the first, or even second time during her Las Vegas show, Britney “did it again” and flashed her audience. As the world recovers, let’s ponder just what might be happening to Miss Spears’ costume design.

In the past few years, the likes of Elton John, Barry Manilow, even rock groups like Kiss have sailed into Las Vegas for residencies that have lasted for a few days to…years. Visitors to Sin City seem to be able to shell out for well known, in some cases more ‘mature’ performers and performers like staying put as opposed to running round on the road so much. Britney Spears has taken to Las Vegas in this fashion, currently working her “Piece of Me” residency at Planet Hollywood’s AXIS Theater. In revamping her show last year she told the Las Vegas Sun “I’ve added a few fan-favorite songs into the show, changed up the intro and had fabulous new costumes designed for each act.”

New or old, those costumes (most notably the body suits and unitards she is fond of wearing) have been problematic all throughout her shows in the desert. One black bodysuit split all the way down Britney’s back just recently, she lost a bra strap just this past fall and just a few days ago her green bodysuit moved just enough while she was dancing and spinning for the song “Work B**ch” that Britney exposed her breast (which she snuck right back in her top without missing a step, like the pro she is).

Obviously, custom made and certain skin tight even though revealing, one would guess things would stay in place for Miss Spears. Maybe indeed it is time she simply employed more latex in her act? Surely sweaty from all that stage movement, at least we know our most favorite material will pretty much stay in place.