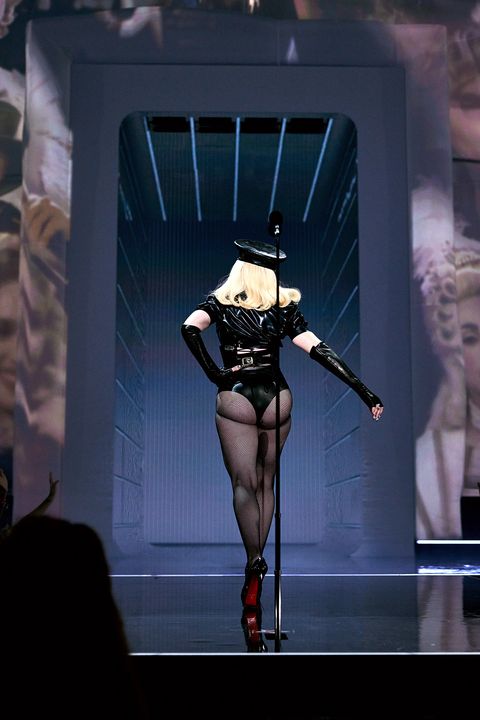 This past week saw two events that brought the latex, leather, lace, and just about every alternative fashion to mainstream viewing: the 2021 VMA’s and The Met Gala.

Leave it to Madonna to ‘bring the latex’! This year, MTV’s Video Award celebration began with a video clip of Miss Madge arriving by cab into a Times Square sporting LED billboards playing her videos. Wearing a Burberry trench and stepping out of the cab in her Louboutins, Madonna related the story of how she and MTV more or less started together 40 years ago (recall her dressed in bridal white rolling around the floor of Radio City Music Hall, singing “Like A Virgin” at MTV’s first video award broadcast?) She then walked out live at the Barclays Center, stripped free of her trench, wearing a latex bra, corset, jacket, and a leather apron and gloves. Spinning away after finishing her speech with aplomb, we all got quite an eye-full of Madonna’s still pretty magnificent rear.

Host Doja Cat really stole the sartorial crown this night, rocking a stunning six outfit changes. Arriving in a fitted corset, draped fabric across her shoulder and waist, over red latex stockings and platforms, she went on to restyle the corset with a skirt, accessorizing with waist chain and gloves. She also hit the stage in a bespoke Thom Browne that encircled her completely, revealing only her face and legs, an later in a fitted corset with a chair as a hat.

This same week, the Met Gala was upon us. This year’s theme was “In America: A Lexicon of Fashion,” named for the exhibition opening at the museum’s Costume Institute, on September 18th. Though most attendees ignored the theme.

Kim Kardashian stepped in completely covered, head to toe in a black Balenciaga bodysuit. Jennifer Lopez once again turned heads, this time wearing a plunging Ralph Lauren with a sky-high slit and fur wrap, accessorizing with a cowgirl hat and giant necklaces.

Madonna didn’t show this night, but her daughter Lourdes Leon did for her first Met Gala appearance. She wore a sparkly fuchsia Moschino by Jeremy Scott, with a sequined bikini halter top and matching skirt.

And Megan Fox made another grand showing wearing a red plunging Dundas gown, with cutouts and straps.

Two looks, though, that captured the night.

Fantasy/science fiction fans could get very excited indeed over Grimes dressed in a curve-hugging Iris van Halpern. She explained that the outfit, made of liquid silicone and hand-pleated silk, was inspired by the epic novel Dune. She accessorized with a sword and metallic mask.

A new movie version of Dune will be released on Oct. 22nd.

Yes, we all got an eyeful this week between these two big NY-based events. Now, take a breath.