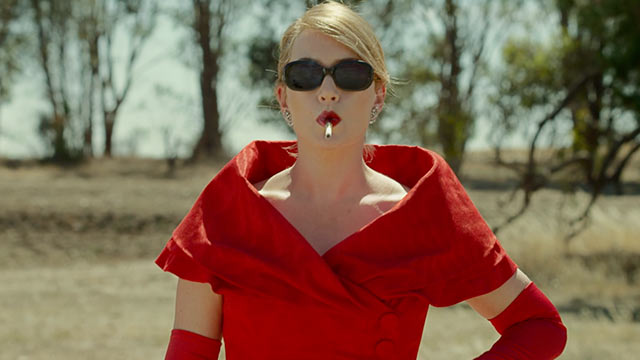 Surely the trailer for Fifty Shades Darker premiering last week gave us all a peek at some kinky daring-do and even latex couture (as well as breaking a viewing record set by The Force Awakens trailer). But Kate Winslet’s The Dressmaker which comes out even earlier and has a new trailer showing presently is a direct fashion-conscious film of intrigue and sexy dastardly fun.

“It feels like a Western with a sewing machine,” Ms. Winslet says of the new film opening the end of this week and based on Rosalie Ham’s 2000 novel of the same name. Winslet’s “Tilly Dunnage” is a seamstress with a decided checkered past who comes back to her 1950’s Australian home for what seems a multitude of reasons. Reconciling with her mother, played by Judy Davis, ‘dressing’ a quintessential “ugly duckling” to turn into comely young lass and even commiserating with Huge Weaving’s cross-dressing cop Tilly uses her Parisian-honed fashion acumen to dress-up and deal with the world she once knew.

She also falls in love with Liam Hemsworth’s Teddy McSwiney along the way   .

For most of the viewing audience, it will be the melodrama and mystery  that will make the film. But to be sure there are reams of 50’s costume design here like vintage Dior dresses, to make any wardrobe fan salivate (though no corsets as Winslet happily reports). Winslet had to learn how to use an ancient Singer sewing machine for her role here, but the lady is well versed in period costumes, having appeared in Titanic, Revolutionary Road and Mildred Pierce, to name but a few.

Australian audiences fell hard for this movie last fall. The Dressmaker hit the #1 spot at the ‘down under’ box office, earning $14.4 million in total and grabbed five wins at the Australian Academy of Cinema and Television Arts Awards. One of these awards went to Winslet winning for best lead actress.