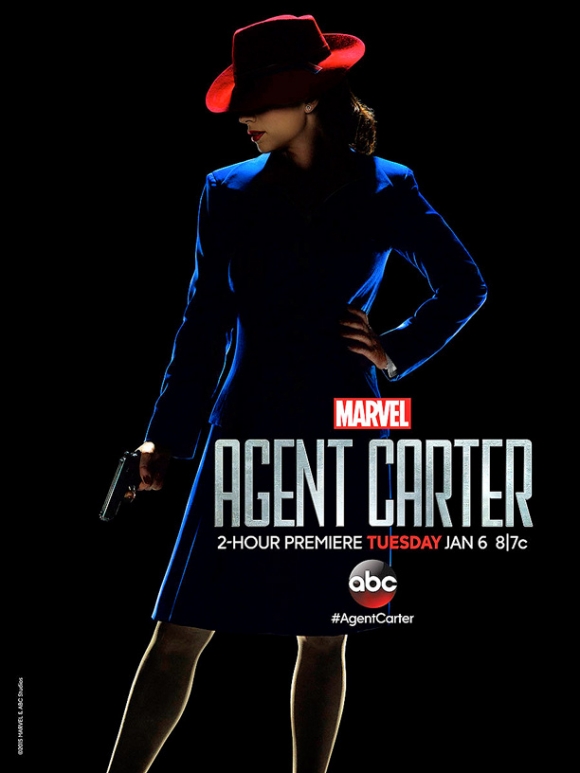 A new sleek, cool, sexy ‘chick’ is coming to T.V. in 2015 in the persona of Peggy Carter starring in Marvel’s Agent Carter.

Sure, we have lots of super smart, proactive ladies populating T.V. presently-Kerry Washington’s “Olivia Pope” in Scandal, Archie Panjabi’s “Kalinda Sharma” on The Good Wife, those sassy smart young women on The Big Bang Theory-but add in a touch of the superhero and period piece couture and any fantasy wardrobe-r is bound to salivate. Hayley Atwell, who we first met as Peggy Carter in the superhero period movie Marvel’s Captain America: The First Avenger, will be working for SSR (Strategic Scientific Reserve) while managing her covert ops on this new show. ABC promises the series will be a mix of “Indiana Jones” and “Alias” with action swift and intricate and worth tuning in for.

(Dawnamatrix’s Steampunk collection could get you adventuring this way if you are so inclined, see here.

Hayley’s accent, her quick wit, and of course the 1940’s glamour makes Peggy Carter so sublimely neat for us all, especially those of us who love dress-up. Red fedora, skirt suits, evening gowns, Giovanna Ottobre-Melton’s costume designs for Carter are sure to play perfectly across the 8 show series premiering this first full week of Janurary. Though not as overtly ‘cosplay’ as a Linda Carter’s Wonder Woman back the day (a series that started as a period piece as well) the clothes, attitude and adventuring are sure to be similar, with a female protagonist in the lead.

In addition to appearing in both Captain America films and on the Marvel’s Agents of SHIELD series Atwell as Carter also enjoyed a Marvel ‘One-Shot’ show. The response to that one shot at Comic Con led to the creation of the new Agent Carter show. What happens to the character beyond the 8 shows, if she will appear again on T.V., or in subsequent super hero movies, time will tell of course.

For now we have another fashionably formidable female to feast our fandom on.