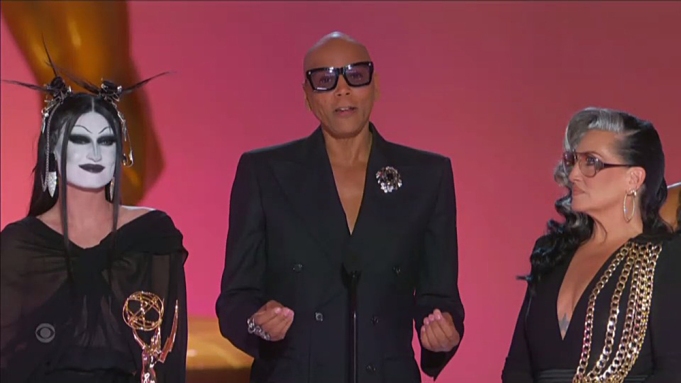 Whether dressed in some latex couture, sporting one of her many fine high-flying wigs, or dressed in a slinky dress that sports a picture of herself nude, fashionistas and fans alike have drooled over RuPaul for years. The unique performer, style guru (real name RuPaul Charles), currently at the helm of the 13th season of RuPaul’s Drag Race, is undoubtedly a cultural icon and fashion influencer. And as of the 73rd Emmy Award show that just passed, RuPaul is now the most-award person of color in Emmy history.

She beat out previous record-holder cinematographer Donald A. Morgan.

RuPaul’s latest award came this past Sunday when Drag Race picked up an award for “Best Reality-Competition Program.” In addition, RuPaul was also awarded “Outstanding Host for a Reality or Competition Program,” her sixth in a straight year receiving that honor. This award was given to the T.V. host/drag performer at the Creative Arts Emmys, held the week before.

First launched in 2009, RuPaul’s Drag Race began littering the T.V. landscape with the most creative drag performers wearing the most outrageous outfits. Spin-offs to the show included RuPaul’s Drag U, RuPaul’s Drag Race All-Stars, RuPaul’s Drag Race: Untucked, and RuPaul’s Secret Celebrity Drag Race. As to be expected with a franchise this popular, the show reached across to Australia, New Zealand, and the U.K. Celebrity guest judges across these various incarnations have included well-known stars like Leslie Jones, Lizzo, Leah Remini, Lady Gaga, and Nicki Minaj, to name but a few.

Another piece of Emmy history was made at Sunday’s night show: albeit not for somebody’s win. The Handmaid’s Tale, up for a whopping 21 Emmy’s, did not pick up one. The Hulu show based on the Margaret Atwood, book now tops the record for the most losses for a show in a single year.