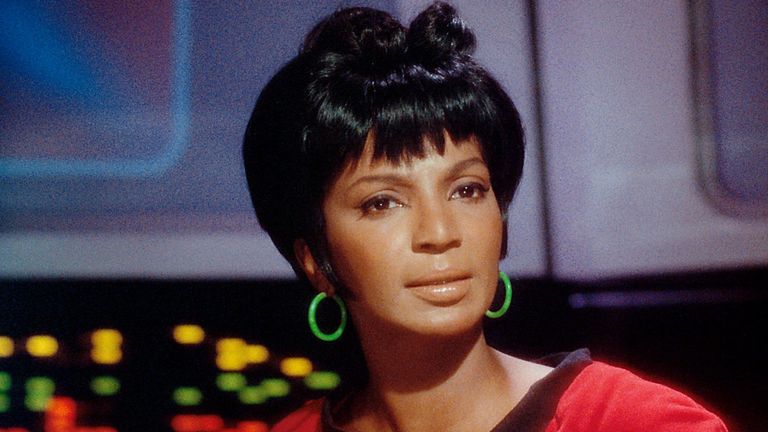 Although she might not have sported any latex in her most famous short dress, we will never forget the super confident presence of Nichelle Nichols playing Lt. Nyota Uhura on the original Star Trek. The actress/singer/dancer died over the weekend at age 89.

“Uhura,” which comes from the Swahili word meaning “freedom,” was an essential science fiction character and inspiration for too many to name. In fact, when Nichols was thinking of leaving Trek after its first season to pursue a Broadway career, it was Rev. Martin Luther King Jr., a sure fan of Trek, who convinced Nichols to stay, reminded her about how important it was at the time for an African American, and especially a female African American, to be featured in the first ‘non-menial’ role on television.

Sure, she is known for having participated in one of the first interracial kisses in television history, on Trek’s “Plato’s Stepchildren” episode, but beyond that controversial smooch and Dr. King’s approbation this was a lady who was a powerhouse talent and influential cultural presence in so many ways.

Nichols began her career at sixteen, singing with Duke Ellington in a ballet she created from one of his songs. She’d come to sing with his band as well. During the 1961 Chicago tryout for the musical “Kicks and Co.,” she came to the attention of Playboy’s Hugh Hefner, who booked Nichols at his Chicago Playboy Club. From there she went on to appear in the title role for a Chicago stock company production of “Carmen Jones.”

Nichols appeared in the movies “Made in Paris,” “Mr. Buddwing,” and “Doctor, You’ve Got to Be Kidding!” before being cast in her most famous role.

After Trek in the early ’70s and 80s, the lady guested on TV and appeared in various films. She lent her voice to the animated series “Gargoyles” and “Spider-Man,” and voiced herself on “Futurama.” NASA would come to employ Nichols in an effort to encourage women and African Americans to become astronauts, and she remained a supporter of the space program ever since.

In 1991, she became the first African American woman to put her handprints in the famous cement of TCL Chinese Theatre.

In 2002’s she starred in “Snow Dogs” and in 2005 the Ice Cube comedy “Are We There Yet?” And two years later she enjoyed a recurring roll on the second season of the NBC drama “Heroes” as Nana Dawson, following a year later appearing in “Tru Loved” and “The Torturer.”

Nichols played Lt. Uhura in the original series, voiced her on “Star Trek: The Animated Series,” and played the character in the first six “Star Trek” films.

On screen and off, and fantastic fantasy fare fan or not, one can’t help but be impressed by Nichelle Nichols.