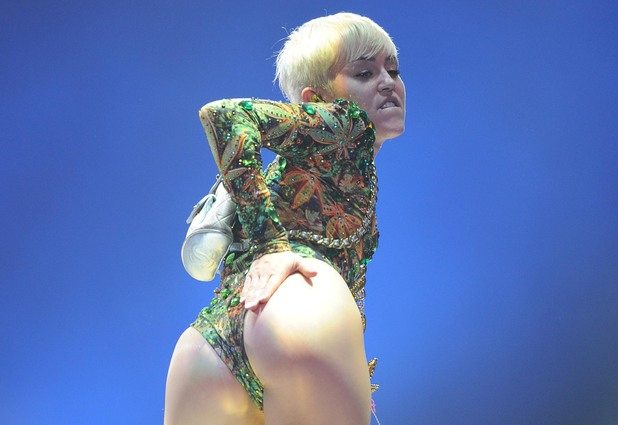 If you caught NBC’s airing of the “Miley Cyrus: Bangerz Tour,” on this past Sunday night of the July4th weekend count yourself as one of a small few. The show, two hours of live footage from the controversial twerkers present tour from Spain and Portugal drew a mere 2 million. That sounds like a lot of viewers but seeing as this weekend in the U.S. was one for repeats because of the holiday Miley’s show was the lowest rated, least watched program of the night across American TV sets.

Still, the 21 year-old singer pulled out her usual panache of posing, singing and most interesting to us, amazing costume-ry. As if sliding in on a huge replica of you own tongue isn’t enough, Miley sported a copious amount of wild outfit changes, with even some interesting costumes for her stage personal. At times sporting a two-piece sparkly leotard (just one of many, she also sported one made of money) plus a red-and-white checkered two piece the ex-Hannah Montana at times danced among what seemed very much like ‘furries’ (for those in the know of that particular fetish) recreations of dancers in big cartoon animal likeness and a ‘little person’ dressed in a red leather jumpsuit, ala Britney Spears.

Leotards are pretty much in the same family as catsuits/boydsuits as far as we are concerned (see here). And as anybody who has worn them knows, leather and latex often go hand-in-glove (tight glove that is…see our most basic sexy pair here). To be sure the spangles, tight outfits, the dancers gyrating in and out of animal outfits and a little person acting like Britney is Art in America we are well fond of and know well.

Good ratings or not, hat’s off to Miley Cyrus for continuing to push the envelope in her dress, deportment and artistry.