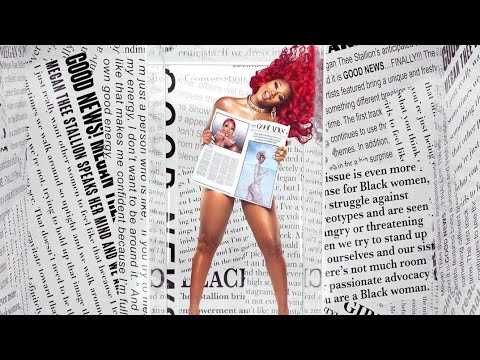 Last week Megan Thee Stallion shared some damn sexy photos across Instagram (although none of them of her in latex) alongside her announcement of the release date of her debut album. The Houston rapper follows-up her EP “Suga” with her first full-length music release today, called Good News, and indeed the haute couture she wore in those pictures was ‘good’ and ‘news’-worthy.

Alongside a stunning array of those Instagram pictures, the 25-year old singer said: “Hotties, I first want to say thank you for riding with me, growing with me, and staying down with me since my first mixtape Rich Ratchet!” And her hotties got an eye-full of Megan wearing fantastic concept couture dovetailing perfectly with her new album’s name. In one picture, she stands on a platform with ‘Good News’ printed across its base, the lady seemingly naked in a clear cube, holding a Good News newspaper from just about her upper thighs to her chest. Megan’s crimson curls sweep fantastically upward at a right angle, and the cube is set in a newsprint-walled room.

In another picture, arguably the best, Megan wears a skintight newsprint catsuit and matching cowboy hat. The newspaper collage that adorns this particular wardrobe includes headlines and quotes (some from a New York Times op-ed Megan penned) about violence against Black women.

As well as being on top of the singles charts this year, lending her talents and bountiful sexy self to Card B’s “WAP” video, Megan released two singles, “Girls in the Hood” and “Don’t Stop.” Megan also released her video for the song “Body,” today; see it here.

(We’ll tackle the ins and outs of this spectacular clip next week…wow!)

In addition to what she wears, how she sings, and new music, Megan is also presently spearheading her, “Don’t Stop Scholarship.”

Yes, the lady has lots going on.