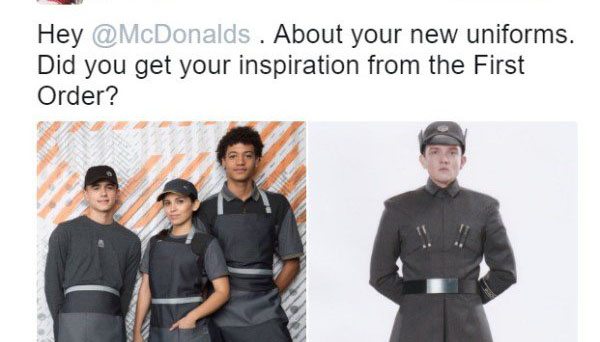 If they would have only asked we could have easily suggested where some latex accessories might have been added to update the look. Or why not even outfit the out front counter help with a catsuit or two (guys and gals both)? It seems though that the McDonald’s Corp. simply went ahead enlisting the services of designers Waraire Boswell and Bindu Rivas to develop brand new uniforms for their workers. And those uniforms are now coming under a social media firestorm, least of all for their too-easy comparison to costume designs from villains in the Star Wars franchise.

Specifically, the new McDonald worker wardrobe is being compared to Star Wars’ Imperial uniforms. The dark gray pants and ‘boxy’ tops the fast food giant hoped to “bridge the gap between fashion and function, allowing for an easy transition from the restaurant to a social environment,” have garnered a bunch of tweets, such as:

“McDonalds Your new uniforms take the ‘Happy’ out of McDonalds. But in fact depressing in ‘sad’ times. Suddenly I’m no longer hungry.”

“As if commercial fast food wasn’t depressing enough, now McDonalds presents uniforms as grey and bleak as their food.”

Bowell, who actually worked in a McDonald’s in California, has designed clothes for such notables as Will Smith, Kevin Durant and singer Pharrell Williams. Rivas is a not as well-known a Indo-British designer. It’s estimated their couture collaboration here will be worn soon by 850,00 McDonald employees, across approximately 14,000 restaurants.

Of course, the fast-food giant had to weigh in against the Star Wars comparison/net backlash. McDonald’s claims that 70% of their employees said they would be proud to wear the new t-shirts, hats, and long aprons. And as popular as they are across the globe, most likely fashion criticisms and Star Wars comparisons won’t amount to very much when it comes to future McDonald burger sales.