Checking in with the Emmy’s, J.Lo and Margaret Atwood 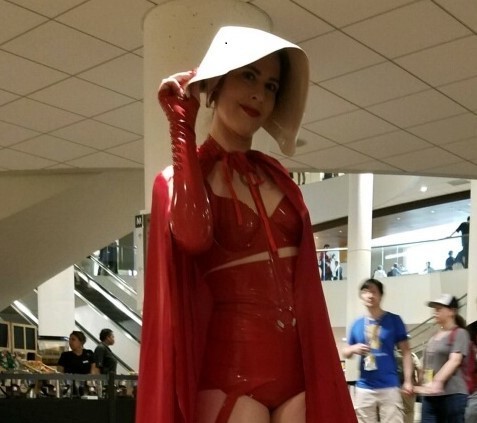 Time to time here on our latex couture blog/culture alt. fashion blog, we like to check in with what celebrities and well-known persons are doing. Surely, the just-passed Fashion Weeks, the Emmy Awards, regular reality-star Instagram posts give us plenty of wardrobe fodder to comment on or expose, and this past week was no exception. Even Margaret Atwood weighed in.

Yes, there were some fantastic fashions revealed down the Emmy’s red carpet just a few days ago. But as lots of people were talking about Kendall Jenner and her sister Kim Kardashian West appearance, we thought we’d weigh in as well. We noticed less what the two women said (and received plenty of mocking for) and more what Kendall had on under the red floral Richard Quinn gown she was wearing. The model/businesswoman/reality star wore a black latex turtleneck bodysuit underneath the gown. It was a stunning complement to a gown that was seen at London Fashion Week a week ago.

Speaking of a ‘Fashion Week.’ Jennifer Lopez closed out Milan Fashion Week a week ago, strutting between a cheering crowd wearing a version of her infamous Versace Grammy dress. Ending the Italian designer’s 2020 Spring Collection presentation, the “Hustlers” star revealed her amazingly toned body (at 50) through those flowy green jungle-print folds we all know so well. Although an AOL piece this week revealed that “Ginger Spice,” wore the dress one month before J.Lo’s iconic Grammy’s turn when she attended the 1st Annual NRJ Music Awards in Cannes. (Of course Donatella has them all beat wearing the dress to the 1999 Met Gala, after Amber Valetta debuted it on the runway.)

Lastly, and something Dawnamatrix has certainly riffed on (see the picture here), Margaret Atwood weighed in on Yandy’s last year “Brave Red Maiden,” costume. Known for sexy takes on popular culture (they are already getting heat for their naughty take on Mr. Rodgers with this year’s Nicest Neighbor Costume) last year the costume supplier offered up a “red mini dress, ventilated cloak and hot bonnet” as their version of the iconic wardrobe the lady’s wear in Atwood’s The Handmaid’s Tale. Promoting her new book, The Testaments on Late Night With Seth Meyers, Atwood laughed off the costume saying: “I have. A sense. Of humor.”