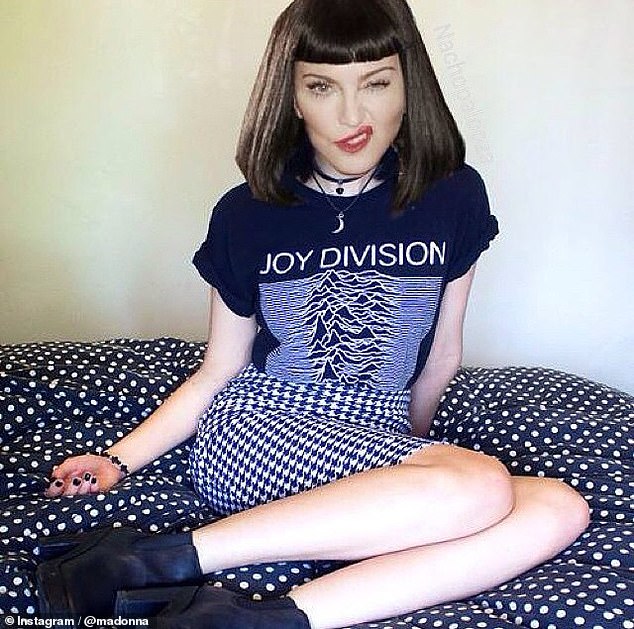 Post all her lingerie, latex, and lace wearing, controversial videos, and her big SEX book in 1992 (photographed by Steven Meisel and Fabien Baron, lest we forget), Madonna seemed to be growing into a still-popular, yet more sedate, middle-age diva. Come 2015, she posted a picture of herself on Instagram, promoting her then, just released Rebel Heart album. In the shot, Madonna sits facing the camera in a houndstooth skirt, “Joy Division” tee, and attitude. But that picture seems to have undergone some sure photoshopping.

The photo, still on Madonna’s Instagram page this six years later, struck Australian Amelia Goldie as quite interesting at the time it was posted. Adopting pretty much the same pose, in precisely the same outfit, Goldie realized The Material Girl had simply taken Goldie’s picture and pasted her head over Goldie’s! Goldie shared the photo on her own Instagram in 2017, saying,” Two years today since queen @madonna used a photo of me on her Instagram with her face photoshopped onto it. Still, the best/weirdest/funniest thing to ever happen to me.’

The only thing Madonna wrote with the picture was, ‘I look Kewl.’

At the time, Goldie thought it was merely a joke. She even tried contacting Madonna. She received no response, and although she claims she was flattered, she still wished she had been credited. This month Goldie took to TikTok to post a video about the happenstance. As one would expect, posting on TikTok can garner some attention and Goldie’s new video about this old controversy has been seen over this past month a good two million times.

It has certainly ‘gone viral.’

We have seen a glut of ‘appropriation’ of images, a little slightly illegal copyright infringement, as many honest accidents as premeditated strikes, happening across the digital space. Youtube stars, influencers, and the everyday guy or girl posting are stepping through a minefield of what’s permissible and what not when reposting, setting up images to sell wardrobe accessories, or just hoping to promote their brand.

One would have thought, though, that Madonna would have known better.