Mad Men Slips Into The 70’s 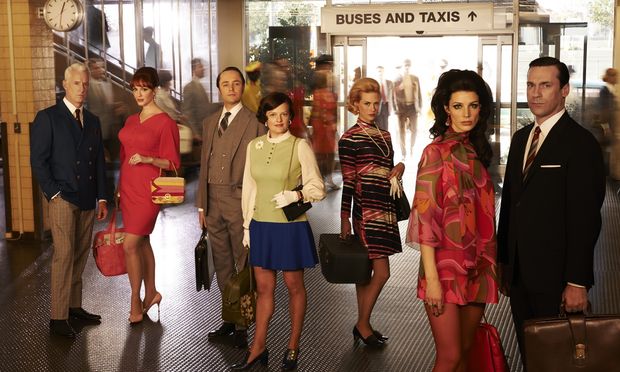 Fan or not of the super popular AMC series, there is no denying that Mad Men, now in its final season, has enjoyed a successful run. The appeal of actors like Jon Hamm, January Jones, Christian Hendricks and so many other talented men and women, the peak through past decades and the delineated roles men and women were locked into were brought alive in the series’ long run (this, their 7th season, is their last). And of course the sartorial sensibility of the show, the resplendent suits and colors of clothes we hadn’t seen in prime time T.V. in so long, added to the cool of the show and had people talking all the time (Tom Fitzgerald and Lorenzo Marquez who run a popular style site have been cataloging almost every Mad Men outfit on their site since the series began.) This last season of Mad Men sees the cast slipping into 1970…and boy is the wardrobe of Mad Men making news once again.

None other than model/actress-and Andie MacDowell’s daughter-Rainey Qualley opened the show dressed in a $15,000 chinchilla long fur, Peggy sported a loud polka dot bow in a business meeting, there was a retail shopping spree, a dress with feathers and bell bottoms even made an appearance as costume designer Janie Bryant once again made Mad Men fashion as popular as its cast and the show’s storylines. Having weathered the 60’s, Don Draper and crew find themselves in a Nixon-era mini-skirted, mixed-print world of big lapels where men wear their hair longer and we are sure to be seeing colors like never before.

Can Puka beads be far behind?

And from what we’ve seen of Bryant’s strict attention to detail, there’s surely to be quite a bit more of that classic intimate attire-worn by women especially-garters and stockings and high waisted panties battling with pantyhose now (maybe not a latex garter belt like our https://dawnamatrix.com/shop/accessories/classic-garter-belt/) as Mad Men always had lots going on that was as much shown as hidden.