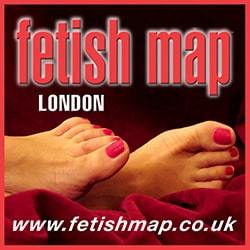 Looking where to buy a latex outfit in London, looking to catch a new gallery showing or view some provocative sketches? Perhaps you’d like to know where to grab a cup of tea where the people are mod and odd, all a smidgen far afield from the UK capital? Want some information on some monthly fetish events? One couldn’t do better than to consult the recently released Fetish Map London. 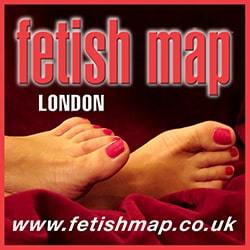 2018 marks the 10th edition of this glossy fold-up/out map, first published in 2002. Back in the beginning stages of the FML, the creators focused primarily on London and its close environs (there is indeed lots to find of a fetish nature in London). As of April 2008, Fetish Map London took on a global scope, hipping hipsters to places, events, and people of a like mind in London and beyond. The map presently enjoys distribution of 75,000 copies released across the USA, Germany, Spain, Italy, Japan, and Holland.
Fetish parties, alternate wardrobe makers and all manner of exciting adult pursuits know no global boundary.
Released as it always has been in conjunction with London Fetish Weekend, in the FML one will find the aforementioned boutiques, toy shops, great places to hang for the kink-minded and just for just folks who like a good hang. Here also you get a year-and-a-half forward listing of events and plenty of advertisements for those who are working in the alternative scene.
As the full breadth of human sexuality is brought further into the light, stigmas for alternate lifestyles are lessened, and we all become just that closer to one another in our evolution and tolerance, something like Fetish Map London serves as just another reminder of how far we have come, and what’s out there if we care to look.
One could easily pick up the map at many of the places it advertises and indicates or by ordering it here.