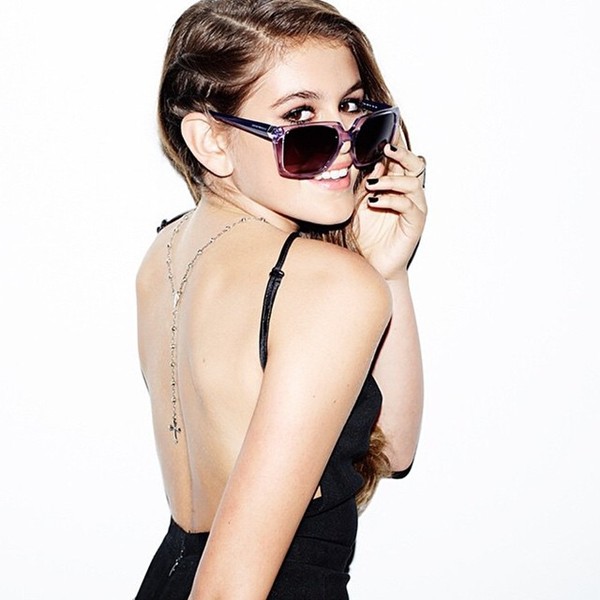 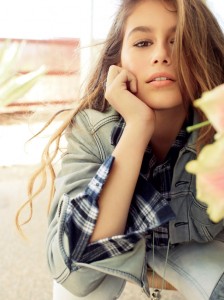 There really is no minimum age for modeling, and being 13 serves one perfectly when one is on the fast track to being one of the most talked about teen models. Keeping this in mind, Cindy Crawford’s daughter Kaia Jordan Gerber is making the most of her youth, look and lineage, as could be seen this week when her famous mom shared Instagram photos from Kaia’s Teen Vogue shoot.

Though Gerber has set her sights on being an actress, she is certainly no stranger to high-end couture or posing for pictures. She appeared in a Young Versace ad campaign two years ago (though at that time her mother put the breaks-on any professional modeling starting then for her daughter at what Crawford considered too young an age for Kaia to be modeling professionally.) The Teen Vogue layout is the younger woman’s first magazine shoot.

In another show of Cindy Crawford’s kids’ talents, her son, Kaia’s 15 year-old brother Presley, was the photographer on the Vogue shoot. On her own Instagram account Crawford wrote: “Love seeing my kids work together for @kbyp #proudmama.”

Certainly Cindy Crawford and Kaia do not set a precedent in the fashion modeling world-Christie Brinkley and daughter Sailor, Isabella Rossellini and daughter Elettra are just a few dual model mom/daughters working this way-but Kaia is certainly making waves presently.

In the latex modeling world we see all kinds of models (female and male at Dawnamatrix specifically) and though no mother/daughter team has been especially celebrated in our world, these women are ‘out there’…though latex couture is not such a ripe field for teen models. If we might see a young woman like Kaia in latex further on in her career (we have been writing about how latex wardrobe is becoming ever more mainstream) one cannot predict, or even if she continues modeling is anyone’s guess, probably even hers’ at this point.

But it seems that modeling lineage does have some strength.