Jessica Rabbit Is Alive And Well…Thanks to Heidi Klum 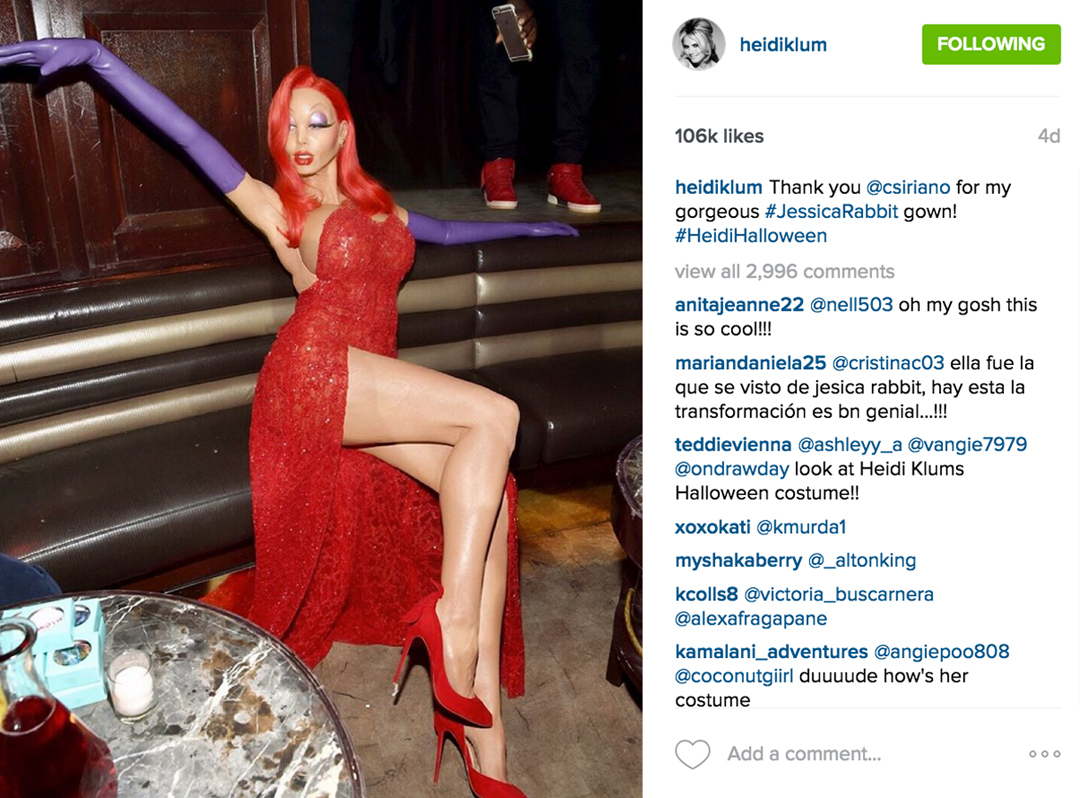 Some instantly recognizable Hollywood costuming, prosthetics, weeks of teasing and a body that could pull it off; Heidi Klum went full-out again for her cosplay Halloween. Dressed as the infamous cartoon cutie “Jessica Rabbit,” the 42 year old super model star revealed pics of her preparation over an Instagram barrage these past few weeks as both her fans and the mildly curious waited anxiously to see exactly what/who Klum would step out as this All Hallow’s.  Some of Klum’s past Halloween costumes have included dressing as Lady Godiva (with horse of course), a psychedelic butterfly (as elaborate as any butterfly in our Space and Time collection) Cleopatra, and a giant apple.

Lots was expected…and Heidi Klum did not disappoint, yet again.

Hollywood’s Mike Marino’s Prosthetic Company helped the Project Runway star transform into the cartoon female star of Who Framed Roger Rabbit? From this A-list make-up house that is “an artistic powerhouse of design and practical make-up effects with clients in all forms of media” Klum was fitted with prosthetics for her lips, eyelids, hips, breasts and butt. The form-fitting red sequined Jessica Rabbit dress (which Klum expertly matched with a red wig and purple gloves) was supplied by Project Runway designer Christian Siriano.

Surely other celebrities sported some fine costumes…some bought, some made. Jessica Simpson and Eric Johnson dressed as Christie Brinkley’s character and Clark Griswold respectively from National Lampoon’s Vacation. Fashion designer/T.V. reality celeb Nicole Richie stepped out as the spooky The Nightmare Before Christmas’ Jack Skellington. And Taylor Swift fashioned herself as Olaf from Frozen. But all these celebs and even the most adept cosplayer would have to go far to beat Heidi Klum this year.

Klum even managed to perform Jessica Rabbit’s famous “Why Don’t You Do Right?” song at her 16th Annual Halloween Party.