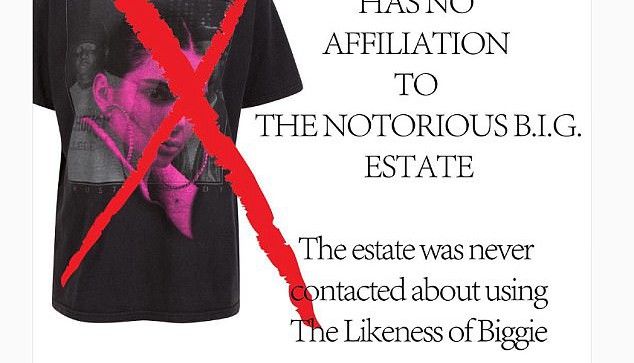 Oh, there go those wacky Jenner kids getting in trouble again, and not even from wearing a latex catsuit.

From their Kendall + Kylie clothing collection, the famous Jenner sisters attempted to release what they were calling “vintage” music t-shirts this week. The ladies took to superimposing their K&K logo or their faces (and in some cases, bikini shots) over classic album cover art and music star images. Using pictures from The Notorious B.I.G., Metallica, Led Zeppelin and many more, the sisters received a huge backlash this week when they revealed their latest attempt at hip haute couture across Instagram.

The famous as well as the not so, came out blasting the budding reality star entrepreneurs across Twitter and Instagram. Voletta Wallace, mother of Christopher Wallace-Notorious B.I.G.’s real name-complained about the sister’s choices, appropriating her son and fellow rapper Tupac Shakur’s images: The disrespect of these girls to not even reach out to me or anyone connected to the estate baffles me. I have no idea why they feel they can exploit the deaths of 2pac and my Son Christopher to sell a t-shirt.”

Ozzy Osbourne’s wife Sharon, tweeted:  Girls, you haven’t earned the right to put your face with musical icons. Stick to what you know…lip gloss.

There was another shirt in the K&K line that showed Kendall’s face plastered over an image of Jim Morrison. And away from dead music stars, there is also a shirt with Kendall’s likeness superimposed over the classic rainbow-emitting prism of Pink Floyd’s famous Dark Side Of The Moon album cover.

Kendall tweeted to the backlash, that the collection was: “not well thought out and we deeply apologize to anyone that has been upset and/or offended, especially to the families of the artists.”
Though this damned line of new celebrity fashion was pulled and the images removed in the handful of days between the Jenner’s Instagram post advertising them and then apologizing, orders came close to exceeding supply for hthe T’s, selling for $125.00 a piece.