How Does Robbie Williams Stand Himself in “Party Like A Russian”? 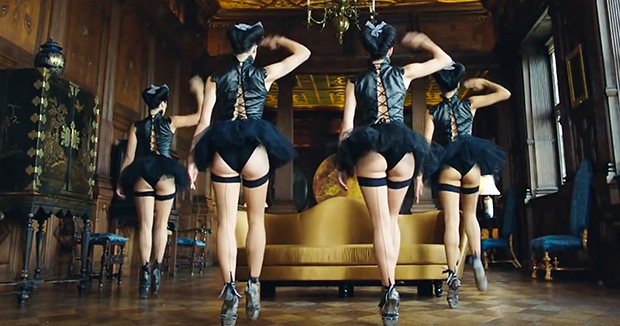 Robbie Williams has released his seeming first single “Party Like a Russian” from his new Heavy Entertainment Show album, mining a wonderfully fetish dress-up look for the song’s video. Obviously taking a cue from the iconic Robert Palmer “Addicted To Love” video (as well as Shania Twain’s all-male beefy backing band on “”Man! I Feel Like a Woman!” ) Williams has his ‘band’ of ladies in high-knee, pinpoint heel, lace-up ballet boots and it is quite the sight.

To be noted, Williams’ the lyrics to the song have been causing more controversy than the costume design in the video. Some Russian blogs and new sources have declared racism, with Life, a Russian tabloid claiming Williams never be invited to play the country again. But lines like: “Ain’t no refutin’ or disputin’-I’m a modern Rasputin” or “There’s a doll, inside a doll, inside a doll, inside a dolly (Hello, Dolly)” might speak more to Williams’ attempt at placing his tongue deep in his cheek more than they do any kind of country/culture-wide racism.

And the 42-year-old singer assures us all via Twitter he is not criticizing Vladimir Putin (as it has been said he is doing) but simply pointing out that “Russians are ridiculously good partiers”.

As to those ladies in their kinky shoes? It helps of course that the women here are all actual ballerinas. So, whether cavorting in white wedding dresses in a wedding scene as they do during some scenes here, or walking or just standing playing their instruments in those boots, they balance perfectly.

And their legs look pretty fantastic as well in their thigh highs and high-cut panties.

Williams himself sports some rather neat wardrobe of textile art. In some scenes, he wears a suit of white and gray paisley (with shoes of the same design). During the band scenes, he sports a black suit with black pants, red sleeve ribbon accents, and red cumberbund. And in another snippet of the video he dances in a black and white hoodie.