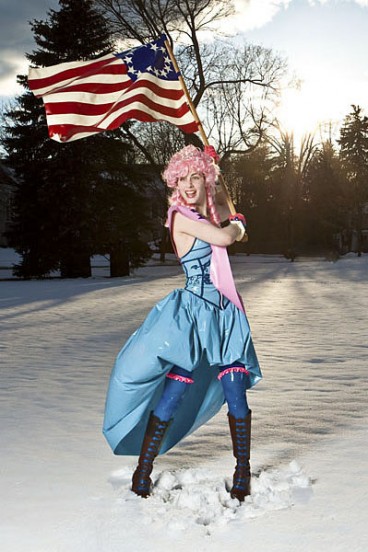 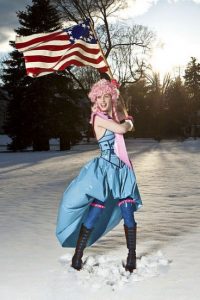 We’d rather consider latex clothes and dress-up over politics anytime, but it’s damn hard to avoid the present American Presidential race…especially if you happen to live/work in the U.S. All the recent talk about feminism and misogyny though from the Clinton/Trump circus happens to come perfectly right in time of one of the great fantasy dress-up revelries, New York Comic Con 2016.

But how’s it all connected?

Through cosplay, of course.

Latex witch queens (of various genders), dragon-finned warriors, Steampunk-ed babes and studs, even a Monty Python “Holy Grail” knight are descending presently on Manhattan’s Jacob Javits Center. Over at the ‘Coming Soon’ site, they are running coverage of NYC’s Comic-Con…and with costuming seen therein that site’s pictures tell the best tale. Attendees this year are as much dressed as famous fictional comic characters like Marvel’s “Peggy Carter” in her neat military lady’s suit from the 1940’s, as they are fashioning mainly homemade wardrobes and accessories as a full-suited “Master Chief” of Halo 3. Then of course, there are those people walking around showing off outfits from characters they have created whole cloth.

As always, it is quite the brew.

But when one considers this costume rendering and wearing, maybe it’s worth noting-especially with the current state of the current debate match-ups (and again we don’t really want to get into all of that wacky political ‘stuff’)- what comic book writer Kelly Sue DeConnick said to “The Frame” some years back about cosplay and the role of women in comics.

“I think cosplay has been one of the driving forces behind that (comic popularity). There are so many more women participating in not just the comic book fandom but the Con culture as well, at San Diego and other cons and that allows us to support a wider diversity of books.”

As we champion diversity, and the freedom for all genders to express themselves equally it’s nice to know that our more fantastic literature and visual imaginings once again provide the high water mark in our evolution.