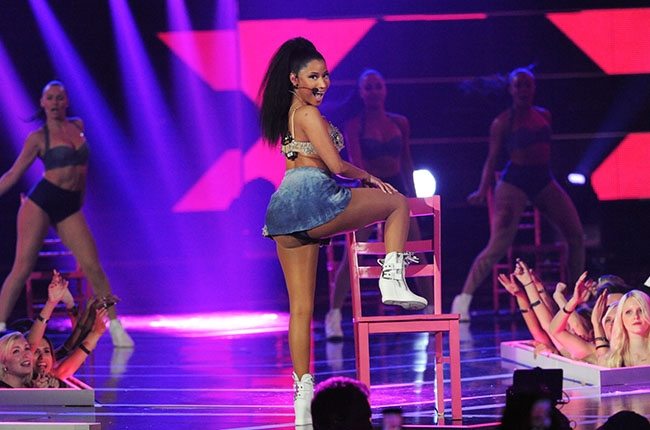 The New York Fashion Week charity star-studded Fashion Rocks hit Barclays Center in Brooklyn this past Tuesday night. What with the VMA’s just past, the Emmys too, it seems we are as much inundated with these affairs this time of year as any other. But if you can’t be drawn-in by super models and pop music then you probably are pretty much sleeping through 2014.

There’s lots to see in the ‘coming in, stepping out’ couture changes that happen at show like this where we catch many performers and stars posing on the red carpet but later changing for their during-the-show performances. Jennifer Lopez walked-in sporting a full thigh-baring black cut-out dress by Atelier Versace then performing later in a shorter-then-short mini for her song “Booty”. Nicki Minaj entered in black as well, but changed to short denim shorts and bra for her latest “Anaconda” as much showing off her own ass-ets as JLo, as the two ladies pushed a ‘derrière is everywhere’ theme. We had Justin Bieber stripping down to his Calvin Klein underwear-while not performing-and even country stars like Miranda Lambert managed a change from sexy-flashing a flashy bra from under the open top of her pantsuit on the red carpet-then sporting a red hot jumpsuit for her performance. Rita Ora actually brought the fashion by performing David Bowie’s hit “Fashion” getting down to a corset with studs and tassels (and you know how much we love corsets, though ours are latex of course…see here.)

Kiss ended the show with a fiery “Rock and Roll All Night (And Party Everyday)” after their buddy/designer John Varvatos (super model Lily Aldridge with him) introduced them and the evening was hosted by heir to the Dick Clark crown Ryan Seacrest, who at times was flanked by models standing whole head heights taller than he…though Seacrest looked great sporting suits from his own Macy Sponsored color-coded suit line.

It is hard to know where the advertising begins or if it ends with these kind of nights and where or if even the intersection of modern pop and fashion do and should meet (questions for better minds then ours, I guess). Still it was another T.V. outing of glitz and high entertainment not to be missed as Fashion Rocked.