Taking to the “Streets” with DoJo Cat 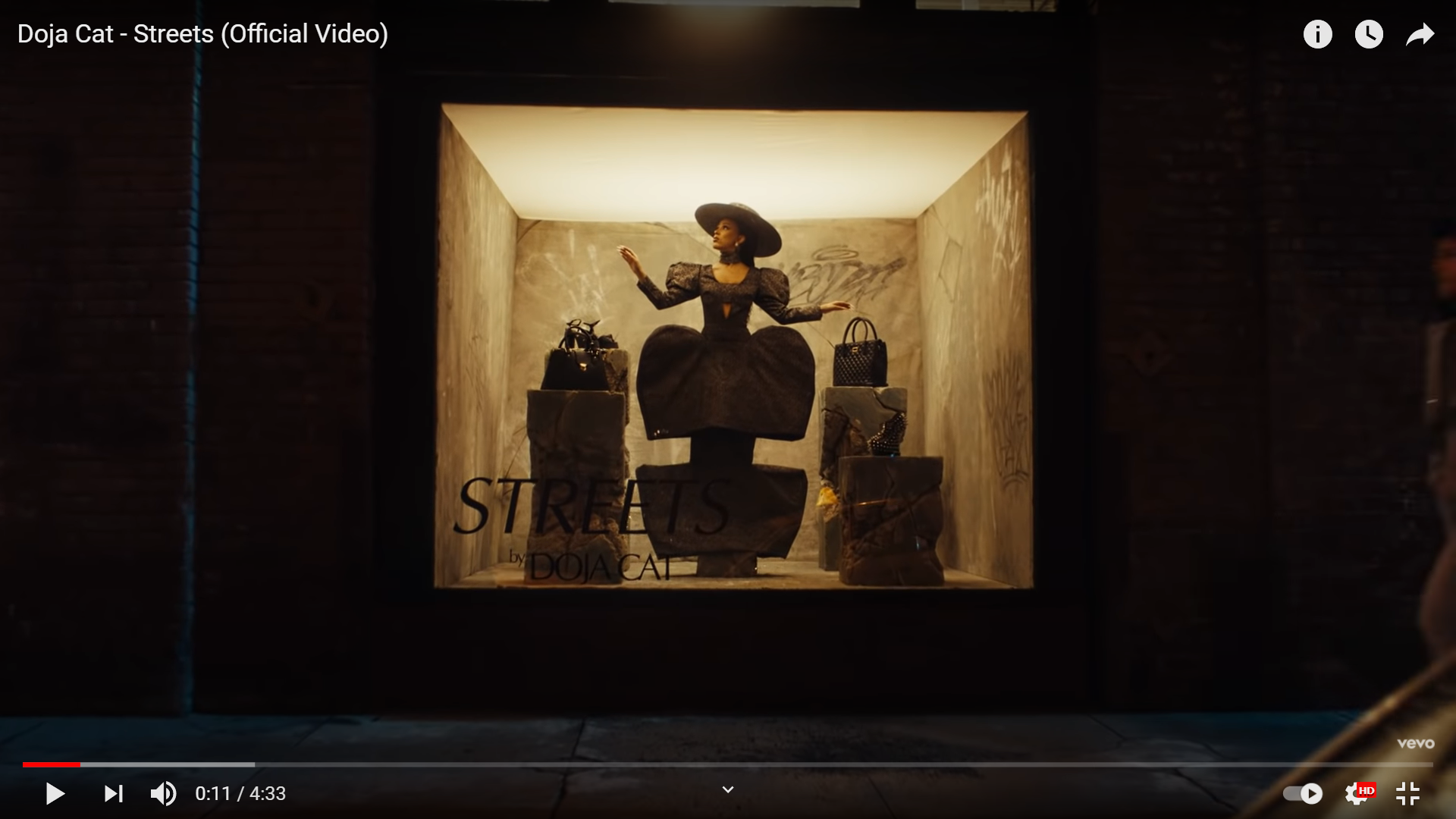 Doja Cat takes the popular TikTok silhouette challenge to the extreme, wearing a combination of latex, lace, and leather in her new “Streets” video. The song from her Hot Pink album released two years ago gets a full steamy treatment in this new video directed by Christian Breslauer and starring actor Kofi Siriboe.

When Siriboe’s distracted cabbie first lands eyes on Dojo Cat, she stands mannequin-like in a store window. She’s dressed in a dark sparkly dark dress and hat, with long poofy sleeves and two bows, one at its center and one at its bottom. As Siriboe’s character gets sucked into the scene, the store window switches to a singular deep red color, and we see Dojo Cat then gyrating in silhouette. It doesn’t take long until the transfixed cabbie is inside the glass with the lady, as the viewer is allowed to see more of the bra, tassels, G-string, and thigh-highs his private dancer is wearing.

In what seems like a modern video trope, there is a long shot of Dojo Cat from on high, allowing the viewer a long look down at her sprawled and dressed in a strategically ripped see-through bodysuit. Then she’s soon crawling and dancing on a car in the ubiquitous zombie-like landscape, where Siriboe pulls himself out of the ground, his teeth now all silver teeth in his obvious transformation.

Next, the man is stuck in a big white spider web as his lady spider slowly advances in a once-piece see-thru back striped outfit.

Not to forget the #SilhouetteChallenge we sweep in over a night cityscape to watch Dojo Cat once again dance, this time against a red silhouette billboard. Then we are into the last scene, where all gyrations stop, and the main lady lays across a couch in a lime green gown, her head in the lap of a Siriboe mannequin watching a nuclear test explosion on TV. Obviously the couple is too close to the action as the room bursts into flames.

At the last half minute of this sexy video we realize it’s all been just a cabbie’s dream as we come back to the opening scene to find Dojo Cat in the backseat of the cab. Siriboe drives us away leaving with a last shot of that store window where a faceless mannequin is dressed in that haute couture bow dress we saw Dojo Cat wearing at the beginning of “Streets.”

‘Streets’ marks the seventh song from Hot Pink to receive a music video.  The scenery, song, #SilhouetteChallenge and especially the costuming are all fantastic.