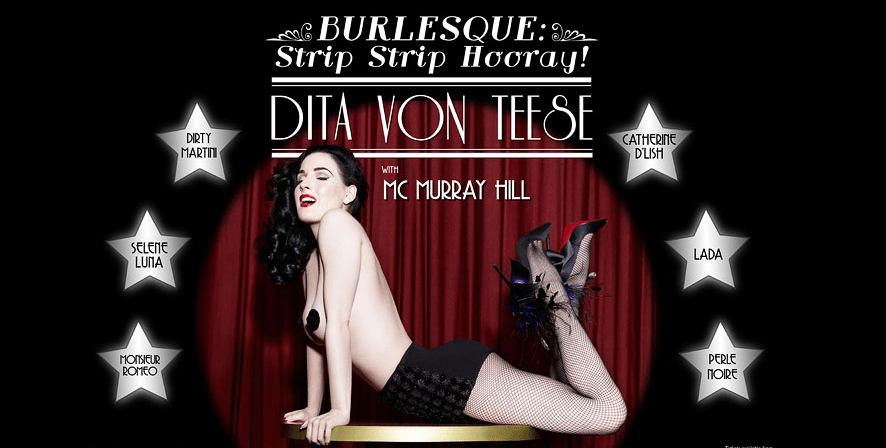 Dita’s “Bird of Paradise” piece features the comely brunette perched inside a posh gilded Victorian birdcage. For this number Dita is dressed in an extraordinary costume of beautifully curved fuchsia feathers. In the show she also features her Swarovski “Martini Glass” act which Dita calls her “ultimate, most decadent, and dazzling martini glass ever!” Dressed in an haute couture tuxedo by Alexis Mabille, Von Teese strips to reveal a custom-made corset and Christian Louboutins.

We’re familiar with corsets being custom made ourselves, see our Leopard Cincher for an example.

See some of our Cheongsam-inspired outfits here: Dragon Minidress and China Dress.

We had a semi ‘1 degree of separation’ with the wonderful Miss Von Teese when she appeared as the cover story (and model) of Marquis Magazine #50 while we had a spread in the same issue of our latex kimonos. Any time we can even get that close to Dita we are happy…as we are reporting this latest last part of her tour.

Going to www.Stripstriphooray.com will get you all the info for this very special show from mistress-of-her-domain Dita Von Teese. Your chances are dwindling to catch a true master performer bringing to life an art form almost all but lost to the few who can still manage to appreciate it.