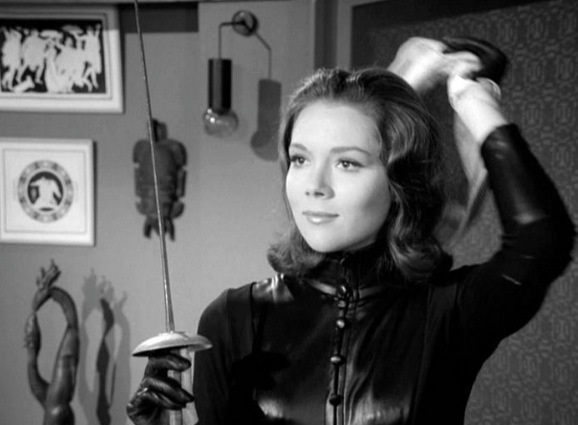 There is sure to be a generation of folks who were influenced to consider a latex catsuit, some leather gloves, or even the day’s mod styles because of actress Diana Rigg. Arguably the lady’s most famous character, “Emma Peel,” was the very embodiment of a sexy, empowered women kicking ass (literally) during the mid-’60s of swinging England. Wearing as much dangerously sexy outfits (and there is no mistaking the fetish wardrobe, really!) as mod fashions on The Avengers, Rigg became as much a fashion icon as many a teenage boy’s (and some girl’s) fantasy.

Diana Rigg died this week at the age of 82.

One instantly recalls or has certainly seen, Rigg in her Sutcliffe-inspired catsuit (later replaced by a stretchy-fabric version, PVC, and even a brightly colored one) during her time on the show. During the later run of episodes, Rigg and costume designer John Bates introduced many a ‘mod’ fashion to the world. Even before the miniskirt was out in the mainstream, Riggs wore them on The Avengers, and Bates bucked T.V. convention at the time by also outfitting the lady in bold patterns and black and white op-art clothing.

Beyond her outfits being controversial and sexy, Rigg also made news at the time by fighting for a raise in her salary. Earning £90 per week, but knowing a cameraman on the show was earning £120, Rigg went to the powers-that-be (something no actress would dare do) to fight against the gender pay unfairness. The newspapers at the time called her out for stepping out of line, and nobody in the industry supported her, still Rigg seems to have fought as hard off screen as she did on.

The lady, who became Dame Diana Rigg in 1994, would go on to further acting beyond The Avengers, on stage, in film and further on the small screen. Winning Emmy’s, Tony’s, and being the only woman James Bond would ever marry (in the film On Her Majesty’s Secret Service) Rigg enjoyed fame all over again when playing “Olenna Tyrell” on Game of Thrones.

A sure classy lady, fantastic fantasy role model and hard-working actress, we salute you Diana Rigg.