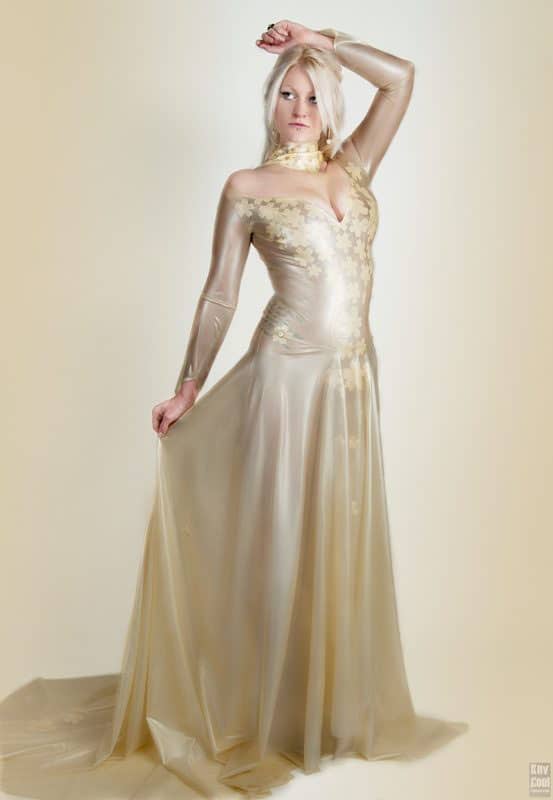 Two recent articles, one from the New York Times and one from Fashionista, reported on new bridal dresses from the just past New York Bridal Fashion Week, with not a mention of latex anywhere. Not that we were expecting something radically alternative at Bridal Week, and there is actually some cool stuff that seems to be trending presently, but one always has hope to catch a truly alternative fashion or some latex wedding couture.
According to the Times’ article, “What We Saw at New York Bridal Fashion Week”
big bridal gown bows are back in style. Attached to the skirt, train, or anyplace else really gowns that made it down the runway for both Carolina Herrera and Ines Di Santo were rocking rather prominent bows.
As to be expected, what the Times article refers to as “show-stopping trains” were also evident for the upcoming season. The Watteau train style seemed to be reintroduced at this fashion week, with Zac Posen showing off a textured detachable train, among many of the others revealed.
There also was a goodly amount of ruffled necklines revealed, lots of lace gowns (again, as to be expected) with Vera Wang, celebrating her third decade in bridal fashion, featuring macramé lace dresses.
Over at Fashionista the focus was on the inclusivity of Bridal Fashion Week (also known as Bridal Week or Bridal Market). They reported on models of color as well as featuring a few paragraphs on male bridal gown designer, Yemi Osunkoya’s debut bridal collection. Osunkoya is the first haute couture designer from Africa to showcase his work during this week since the passing of Amsale Aberra.
Pnina Tornai, Pronovias were two of a few designers called out for including curvy models in their showcasing, and David Bridal and Ines di Santo (again) showcased same-sex couples in the marketing.
If the designs weren’t especially radical, the bridal fashion industry is making strides in who they employ to show off their gowns as well as including lots of different designers making them. You know you need only to slip on over to the Dawnamatrix wedding collection for latex choices of gowns.