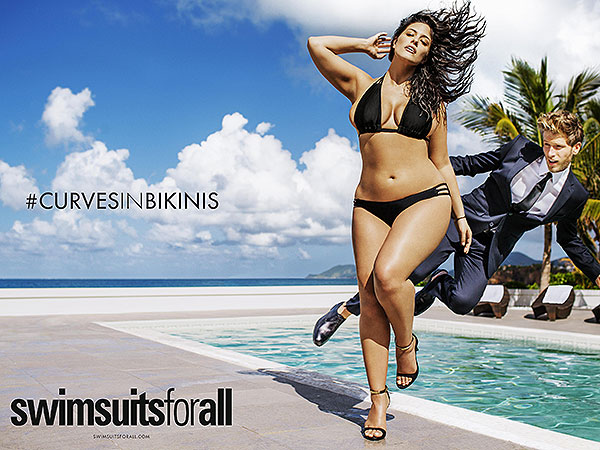 Models with last names like Benhati, Teigen, Lima are regulars to the Sports Illustrated Annual Swimsuit Issue. But Ashley Graham, the first ever plus-size model to be seen in the infamous issue, will be cutting a historic figure indeed when she appears in the yearly bikini edition hitting new stands next week.

Never before has a woman with such curves been in the magazine and as 27 year old Graham proudly declares: “I know my curves are sexy and I want everyone else to know that theirs are too. There is no reason to hide and every reason to flaunt.” Her appearance is part of the Swimsuitsforall Campaign, ‘#CurvesinBikinis.’ Championing what many designers are coming to consider a decidedly ‘Curvy Girl Era’ as it is being called, Graham’s body being revealed in a bikini, in such a highly anticipated swimsuit photo-spread, is sure to send the message loud and clear that plus-size women can rock a two piece as much as anyone else.

And also the message of…why has it taken so long to get a woman with such bodacious curves into the magazine?

From kimonos to leggings, bras and corsets, Dawnamatrix has fitted women (and men) of all different sizes and shapes. There truly is no one specific latex size aesthetic for the general public, we have made pieces for all heights and weights and sell our wares to a widely varied mix of people…vive la difference! we have always proudly declared.

Ashley Graham-a size 16 by the way-has appeared in Elle, Harper’s Bazaar, and Latina and will be sporting a black bikini in Sport’s Illustrated. And as she says: “I think that you can be healthy at any size and my goal is to help and educate women on that.”

Her modeling for Sports Illustrated’s Swimsuit Issue surely illustrates this point and we say good for you Ashley!