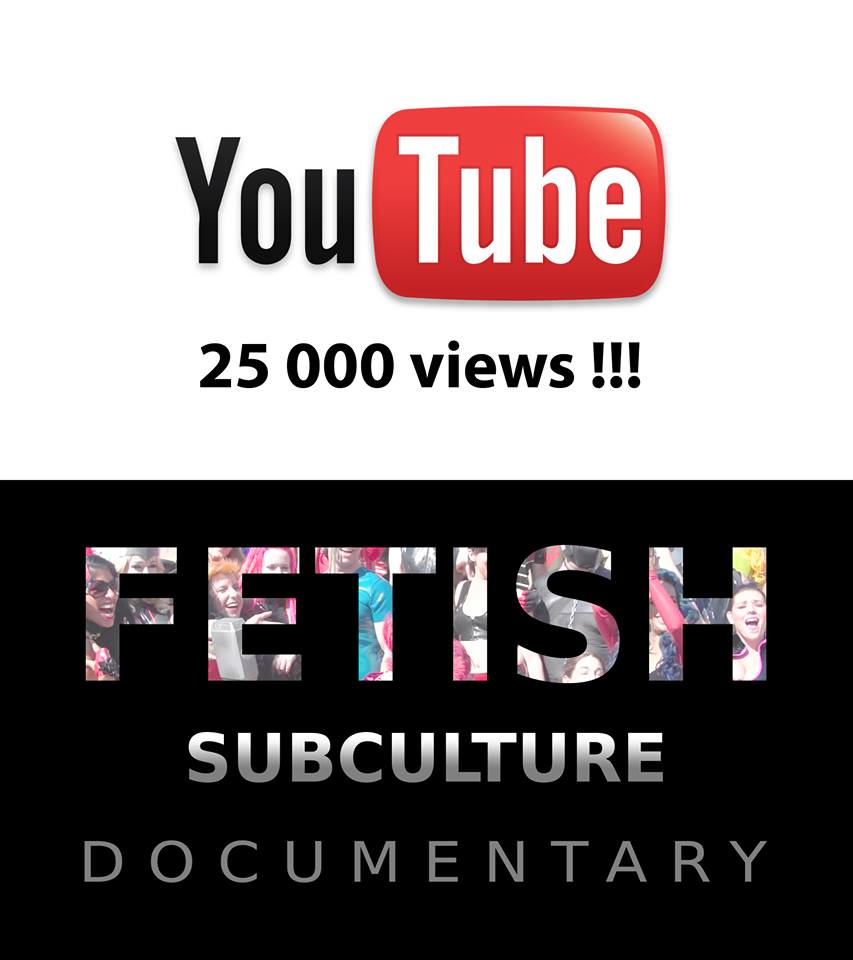 We told you about and showed you the link (but here it is again: https://www.youtube.com/watch?v=YCrsEmaCnUI) for The Fetish Subculture Documentary we were so thrilled to be involved in. It was as much an honor to be asked to give personal opinions about the community we so love, as it was to see ourselves actually in the finished film.We have just learned that all of us involved in The Fetish Subculture Documentary have even more to be thrilled about, the movie has just passed the milestone of having received 25,000 views on YouTube across 153 countries!

Director/producer/director Carl Simard has also been working the festival circuit with the film. It is presently lining up for, or has been shown in four festivals around the world. There was the Fetisch Film Festival in Kiel Germany where the movie played in Nov. 2014, the Roma Fetish Film Festival in Rome, Italy, where it showed in February just passed, at the Copenhagen Fetish Film Festival where it just played this week and for an upcoming showing at the Best of German Fetish Film Festival 2015, in London England, on May 13th.
This “first contact between the fetish world and the educated general public” was a labor of love Simard started back in 2011 as he began to cull together his interviews with so many different talents working in the lifestyle community of fantasy wardrobe, film, fetish modeling, event producers and painters. A good amount of what Carl filmed was gleaned from sit-downs at the Montreal Fetish Weekend (that’s where he grabbed us) and as so much happened ‘up’ in Canada, who better to be spokesperson for the film then Canada’s own stunning actor/filmmaker/make-up man/fetish model The Richard.

His sequences in the film really speak to the ethos we all share.

Just a small portion of the rest of the cast (a cast being seen lots now with all these festival showings and the YouTube views) include fetish models, Jasmine Virginia and Jean Bardot Studios; photographers, Philip Faith and Paul Green; filmmaker Patricia Chica; designers Patrice Catanazaro, Kayla Lael and yours truly and event producer Eric Paradis.

We’re all reveling in the success of The Fetish Subculture Documentary.