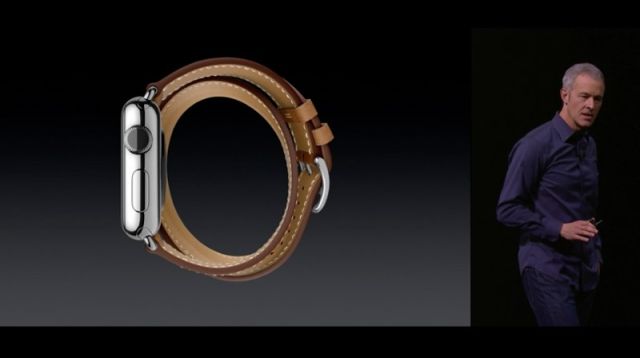 While it’s always fun to speculate just where latex clothing and alternative styling may thrust us in the very near future, a very recent announcement might just have revealed a high water mark marriage of couture and technology. Besting any “smart clothing” campaign or newly modern fashion statement, the Apple Watch Hermès collaboration will no doubt take the world by storm.

It certainly has the blog o’sphere buzzing this week.

Each Apple Watch in this collection will come engraved with the Hermès signature. The “Single Tour” version comes in both 38mm and 42 mm stainless steel cases, the “Double Tour” in a 38mm only and “The Cuff” 42mm only. Customized exclusive watch faces are offered in three designs, as well as the all-to-recognizable Herme’s orange color. The bands are handcrafted of Barenia leather.

Pierre-Alexis Dumas, Hermès’s executive/vice president in charge of artistic direction says of the collaboration: “What more contemporary and relevant expression of this principle could there be than this collaboration with Apple. We are strongly united by the same deeply held ideas and principles. I see it as the establishment of an alliance in excellence; like horse and carriage, a perfect team.”

Beyond the Hermès connection Apple announced an watchOS 2, update to the Apple Watch’s operating system, available in a week, plus their own new fashionable watch band updates-certainly cheaper than the over $1000.00 Hermès bands. There is even a “Product Red” stainless steel Apple Watch sporting a bright red strap made for the Global Fund to Fight AIDS (some proceeds of sales goes to the organization); this watch ranges in price well below the Hermès…to well above it.

Trying to make a fashion statement with our own Textured Latex or signature Latex Kimonos  we understand the constant attempts at innovation in fashion, the marriage of big brand names, startling new technologies and untried ideas informing new wardrobe paradigms. It’s just anyone’s guess where this Apple/Hermès collaboration will bring the two giant brands.