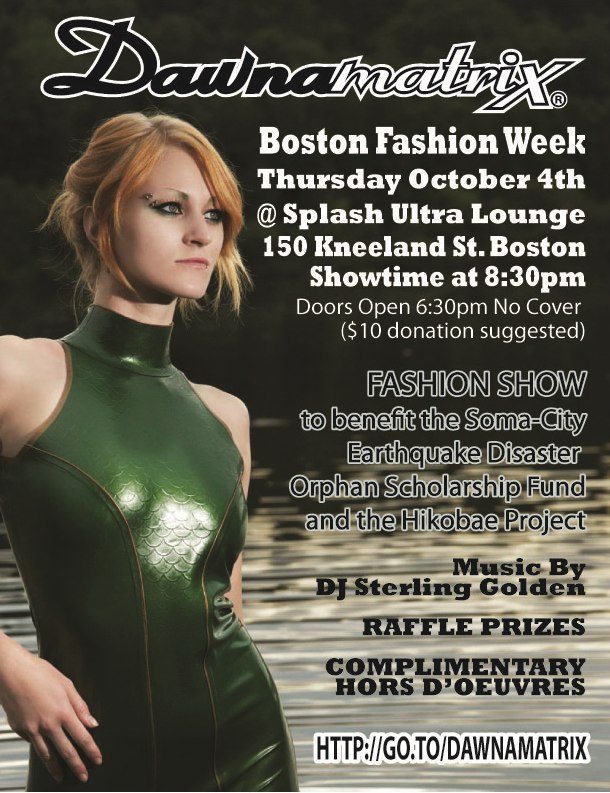 Dawnamatrix and the Kanto Foundation are pleased to announce the U.S. debut
of Dawnamatrix’s new line of latex couture fashion during Boston Fashion
Week on Thursday, October 4th, 2012.

Latex couture is a revolution in fashion, merging fine art with high
fashion. This new collection of elegant and daring styles for men and women
features exclusive textured latex in unique patterns such as multi-tone
checkerboard, pinstripe, and dragon scale. Superhero films such as The
Avengers and HBO’s fantasy series Game of Thrones served to inspire the new
collection. Dawn Mostow, the creative force behind Dawnamatrix says, “The
whimsy and power behind the fantasy genre has been a major influence this
season and I think the audience will be thrilled to see the new designs.”

Dawnamatrix was founded in 2010 by Dawn Mostow. Dawnamatrix fuses the beauty
and elegance of couture fashion with the sensual quality of latex. Intricate
appliqué and textures are a prominent feature of Dawnamatrix garments and
each one is a unique work of wearable art. Dawn Mostow holds the title of
Miss Rubber World 2010 and was formally trained in the art of kimono wearing
while living in Japan for many years in rural Takayama City. Her designs
have been featured internationally in both fashion shows and art
installations.

Through the Kanto Foundation, the event will benefit the Soma City
Earthquake Disaster Orphan Scholarship Fund and Hikobae Project – a
theatrical play, in English, based on the Great East Japan Earthquake.